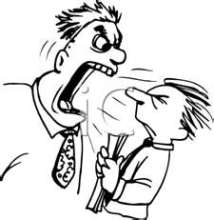 Getting started in stand up comedy is pretty much like being a kid again. You’re going to mess up and sometimes, you’re going to get scolded. In the six years I’ve been doing this, this has happened to me at least twice. I’ll share one of those experiences with you.  While opening at a well know comedy club, I ended my set too short. I was given 10 minutes, however, I never got the light, (every club gives the performer a light from the sound booth, when it’s time to wrap it up,) to end my set. Considering that I was still in the beginning stages of my stand up career, I didn’t exactly have more material than I had been rehearsing for, so the fact that I didn’t get the ‘light’, sent me into sort of a panic. Rather than stay on stage, I said thank you and went on to introduce the Feature performer for the night. Unfortunately, the owner had not been in the sound booth, which is the reason that he didn’t give me the ‘light’ so, the next comic had to go on stage with absolutely no intro music. I then left outside of the showroom where the owner greeted me with not so kind words. I didn’t want to admit to him that I had completed my set and had run out of material to use so, I simply stood there and got an earful!  I should have been prepared with more though. I did have other stuff I could have used but, I had not rehearsed it and it certainly wasn’t immediately available in my mind while on stage.

A quick word of wisdom, to any beginning comic out there; Always be prepared with enough material to fill the amount of minutes you are given. Do NOT plan to go over that BUT, always, ALWAYS, have a few more minutes ready to go should the owner, sound guy or manager not be ready to give you the ‘light’! Hey, for all you know, you might be getting more time because you’re simply killing it out there! Before too long, you’ll be wishing you would always get more time!

One thought on “WHAT’S WRONG WITH YOU?!”

This site uses Akismet to reduce spam. Learn how your comment data is processed.